Do you know that there is a difference between a hand mixer and a stand mixer? When it comes to the basic function, both the mixers serve the same purpose. But, there is some noticeable difference in both the appliance. Before going in deep and compare the two products, here is everything you should know about each appliance.

As the name itself suggests, a hand mixer comes designed in such a way that it can be held in hand and can be used to mix different food materials. When it comes to a hand mixer, the appliance is lightweight and this is one of the main reasons why a hand mixer can be used with a single hand. All you have to do is simply lift the product and immerse the beaters into the food and then switch on the appliance for an efficient mixing action.

A stand mixer is entirely different from a hand mixer, even both the appliances are designed to perform efficient mixing function. The exterior and interior design of this appliance is different. A stand mixer comes with a strong frame on which a motor and a bowl are mounted. Once the motor is switched on a rotary action happens in the bowl, which results in the mixing of loaded food materials.

Now you know the basic difference between both the products, now, let us go deep into the major difference, advantages, and disadvantages of stand mixers and hand mixers. 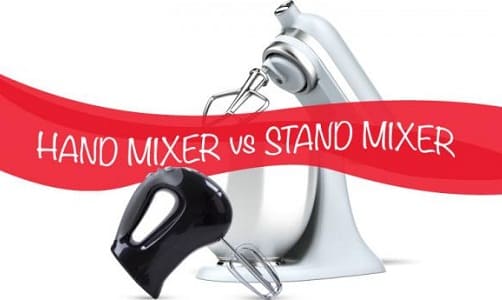 Advantage of Hand Mixer over a Stand Mixer

Advantage of a Stand Mixer over a Hand Mixer

Disadvantages of a Stand Mixer and Hand Mixer

Even though we have mentioned the best appliance based on the customers perspective, as an expert, we cannot neglect the fact that when it comes to features, efficiency, and power a stand mixer is better than a hand mixer.